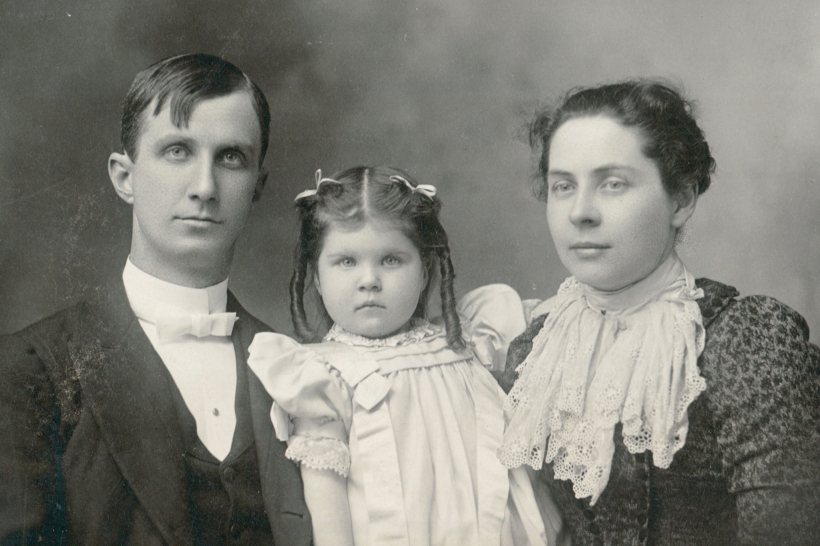 Most of the images in my collection of unknown photos are cabinet cards. Although introduced in England in 1866, cabinet cards did not become popular in the United States until the late 1870’s. If my dating estimates are close, the cards in this collection date from the mid 1880’s and later.

Photo paper in the late century was thin and subject to curling, so the photographer would mount the picture on a stiff card measuring usually 4¼ by 6½ inches, considerably larger than tintypes andThe cabinet card’s name probably derived from the fact that these larger cards could be displayed on a cabinet and seen from across the room, unlike their smaller predecessors.

The card itself evolved over time from very plain to quite elegant and included different colors, edges, borders, and fancy artwork advertising the studio. These attributes are used to determine the approximate dates the photos were taken. I estimated the dates attached to the photos in this gallery using the card designs and the guidelines in 19th Century Card Photos Kwik Guide by Gary W. Clark. Hair styles and clothing fashion are also used to date photos, but I found this difficult and confusing. That method I will leave to the experts. The date of one photo however I am sure of because someone took the time to write it on the back.

As mentioned in earlier posts, these photos likely belonged to my great grandmother Sarah May Howell Graham (1871-1948) and would be of her family and friends. The duplicates in the collection would presumably be household members or close family. I am especially intrigued by the older gentleman with the beard.

My theory, or perhaps a hopeful guess, is that he is Sarah’s father Augustus N. Howell (1845-1920). There are two of these photos plus the one of him and three women standing in the doorway of a brick building. I came to the assumption that he is Augustus because of the multiple photos, and because he appears to be the only man in the photos old enough to be Sarah’s dad. Identifying the building in the photo would be helpful to prove or disprove this theory. The ladies look similar to those in some of the other portraits but it’s hard to be sure.

Nine of the photos were taken in Wilmington DE, a short train ride from Cecil County MD. Three were taken in Baltimore and six in Philadelphia (cities on the same rail line).

Only one card is labeled with a name. I am thankful to the attractive young lady for writing on the back of this card, “Lola E Kessinger to Sallie Howell”. “Sallie” was Sarah’s nickname. (Someone later copied these words to a sticker on the front.)

I cannot describe the sense of mystery, wonder, and curiosity I feel as I look at these faces and stare into their eyes over and over again, knowing that the blood of many of them flows through my veins and that their DNA is coded into every cell of my body. My hope and prayer is that one of you seeing this post will recognize someone from an old family album and contact me. It is a grave mistake, as time moves forward, to forget those who have gone before us. It’s not just the famous, the generals and politicians, that we need to remember, but the ordinary people without whom we would not even exist.