After posting three articles and scores of unknown photos of my Graham and Howell ancestors, I am happy to announce that one of the photos has been identified! Through ancestry.com I met my 3rd cousin, Suzanne Grimes, who has a number of 19th century Howell photos. Her grandmother, Beatrice Howell Johnson, had the foresight to write, “Grandmother Howell wife of Augustus Nolan Howell” on the back of this cabinet card.

May I present Susanna Reynolds Howell, my great-great grandmother:

Susanna’s parents were John and Sarah Mary Reynolds. According to her death certificate, Susanna was born November 17, 1841, in Elkton, Maryland. However, the 1880 and 1890 census records show her birth year as 1844 and place of birth as Delaware. Could it be that she fudged the dates on the census in order to appear to be only 3 months older than her husband (rather than 3 years and 3 months older)?

Susanna married a young blue eyed farmer, Augustus Nolan Howell, on August 8, 1866, in Cecil County Maryland. He was a 21-year-old civil war veteran. She was also 21 (or was it 24?). Augustus’ ancestors were Quakers from Pennsylvania. His 3rd great-grandfather, John Howell, immigrated with his family from Wales to the colonies in the late 1600’s. Family tradition holds that they traveled on a ship with William Penn.

Although Maryland never succeeded from the Union, young Gus along with thousands of other Marylanders crossed the Potomac River to enlist with the Confederate Army. He served with the 1st Maryland Artillery, a part of General Lee’s Army of Northern Virginia. He suffered from poor health and was discharged “by reason of Phithisis [phthisis: pulmonary tuberculosis] and General Disability” on July 14, 1862.

According to Augustus and Susanna’s granddaughter, Beatrice Howell Johnson, Susanna had a brother who was killed during the Civil War on the Union side. Nevertheless, the Howells were sympathetic to the Confederacy. Beatrice, who as a child lived with her grandparents for a while, told about winning the spelling bee at school as a young girl. The prize: a picture of Abraham Lincoln. She ran home and proudly showed the family her award. They told her, “Guess you can hang it in the outhouse”.

Another example of these sympathies was Augustus and Susanna’s daughter (my great-grandmother) Sarah May Howell. She and her husband Jonathan James Graham operated a general store in Charlestown, Maryland, for many years. It is said that great-grandmother Sarah would not allow a $5 bill in the store because of the presidential portrait it featured.

The Howell’s first child, John Robert, was born in 1868. The second, Harry Ellis, was born in 1869. According to the 1870 census the young couple with their 2 small children lived near Chesapeake City in Cecil County, Maryland. “Gustus” was engaged in farming and they had an 18-year-old farmhand living with them. Aunt Rachel Howell, Augustus’ sister, also lived with them and helped take care of the children. She would entertain them with stories of the British Fleet coming up the river during the War of 1812. She also spoke of Jefferson Davis, who became the president of the Confederate States of America, as a good friend and it is possible that he may have visited her. My cousin Suzanne has an old pewter and silver teapot, cream pitcher, and sugar bowl that her grandmother Beatrice was quite proud of. She said that the Howells had used this very set to serve tea to Jefferson Davis himself.

The young couple apparently had a difficult time making a living as farmers. The Cecil Democrat, a local newspaper, published this notice on December 3, 1870.

By the next census, 1880, they had moved about 30 miles east to New Castle, Delaware. Augustus worked there as a farm laborer. The family grew to six; my great-grandmother Sarah May was born in 1871 and Charles Franklin was born in 1880. Aunt Rachel, at 84, is still with the family. By the time their fifth and last child, Jesse Neal, was born in 1882 they had moved back to Cecil County, Maryland. They became tenant farmers at Seneca Point Farm sometime before 1889. 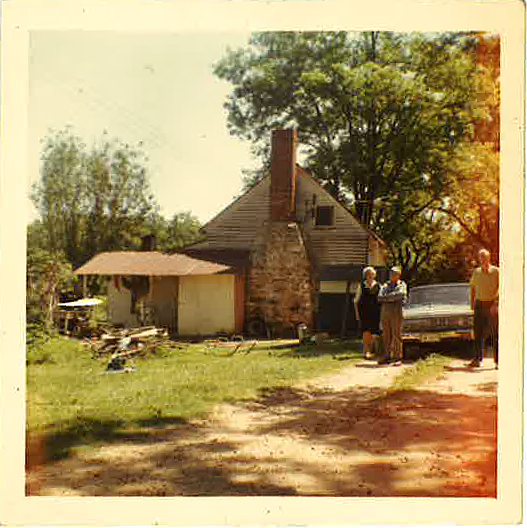 The kids had all moved out of the home by 1900. Grandparents by now, the census states that the Howells rented their farm and housed two laborers, 13-year-old Harry Leedom, and a widower, James Davis (age 61), both listed as “servants”. In 1910 they are still farming, probably still tenants on the Seneca Point Farm. Granddaughters Beatrice (age 9) and Laura (7) Howell lived with them for several years. Beatrice later wrote, “I wasn’t happy and bothered my mother a great deal. I missed my grandfather and grandmother, who had moved to a small 40-acre farm about 5 miles up the county. It was decided I should go to live with them. I lived with them until 1913 when I wanted to live at home in Wilmington, Delaware.” Laura and Beatrice must have been a delight and help to their grandparents and it’s easy to imagine Susanna teaching the young ladies to grow veggies, cook and tend to the many chores necessary to maintain a busy farm home.

A few years later, due to deteriorating health, Augustus, no longer able to farm, moved in with his oldest son John and his wife Mary near Elkton, Maryland. This was to be his last earthly move. 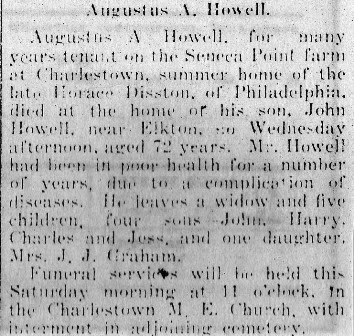 Augustus A. Howell, for many years tenant on the Seneca Point Farm at Charlestown, summer home of the late Horace Disston, of Philadelphia, died at the home of his son, John Howell of Elkton, on Wednesday afternoon, aged 72 years. Mr. Howell had been in poor health for a number of years, due to a complication of diseases. He leaves a widow and five children, four sons: John, Harry, Charles and Jess and one daughter, Mrs. J.J. Graham. Funeral services will be held this Saturday morning at 11 o’clock in the Charlestown, M.E. Church, with interment in adjoining cemetery.

Unfortunately, we don’t have any details of Susanna’s later years. It may be assumed that she also lived with her son John and family. Her obituary appeared in the Cecil Whig in March of 1939.

Mrs. Susanna Howell, 97 years of age, wife of the late Augustus N. Howell, died Friday evening, March 3, at the home of her son, John R. Howell, Elkton, Md. after a long illness of complications. She lived her entire life in Cecil County. She is survived by one daughter and four sons: John R. of Elkton, Harry E. of Iron Hill, Mrs. Sarah Graham of Charlestown, Charles F. of Casper Wyo., and Jesse N. of North. 18 grandchildren, 29 great-grandchildren [including my mother, Sarah May Graham], and 1 great great grandchild. Funeral services were held on Tuesday afternoon, March 7 at 2 o’clock in the Charlestown M.E. Church of which she was a member. Services were in charge of Rev. Frank Buckley. Interment at Charlestown cemetery. Pallbearers were five grandsons and 1 great grandson. Jesse, John and Bayard Howell, Horace and Howell Graham [my grandfather] and Paul Johnson.

I have attempted to present an accurate account of the lives of Augustus and Susanna Howell. However, no doubt there are errors. Some of the documents and information I found were not in agreement. I would welcome and appreciate any additional information and corrections. 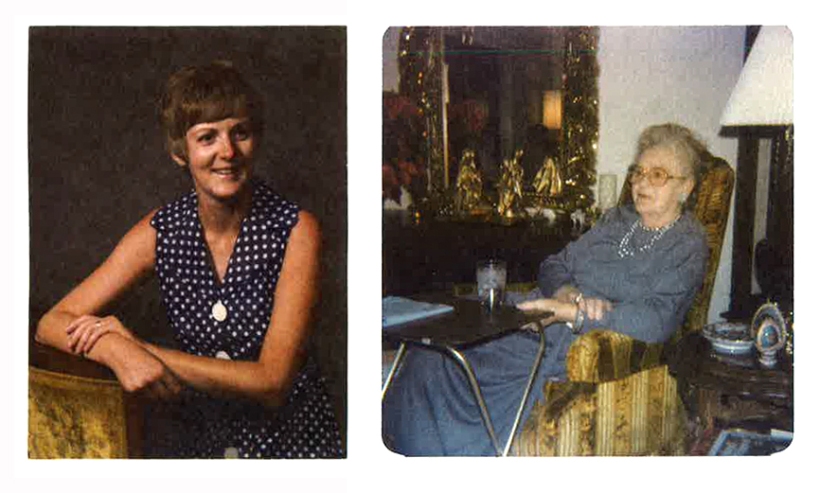 A special thanks to these two descendants (above) of Augustus and Suzanna Howell: Suzanne Grimes (left) provided photos, notes, stories, and the bulk of the research for this post. Her grandmother (right), Beatrice Howell Johnson (1900-1991) was the source of much of Suzanne’s research.