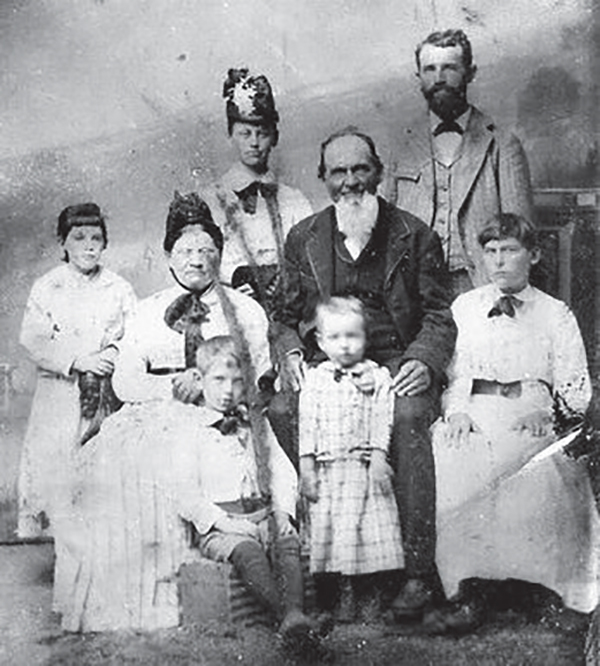 John Black Graham (1822-1912) is my 3rd great uncle. His younger brother, Francis Dailor Lafayette Graham (1830-1912), is my great-great grandfather. John is well known to this day as one of the most famous duck decoy makers of the upper Chesapeake Bay. Recently Gerard William “Rod” Wittstadt, Jr., Esquire, published his online book “Cecil County Decoys”. Rod worked many years researching his subject and has done a remarkable job. I am very thankful that Rod has given me permission to publish here word for word Chapter 9 of that book. While this chapter focuses on John B. Graham in particular, it also provides an excellent history of my ancestors on my mother’s side, the Grahams of Cecil County, Maryland.

Any notations in the text in brackets [like this] are my words, and are not part of the original chapter. This material is copyrighted 2017 by Mr. Wittstadt.

To see the whole book, or to contact Mr. Wittstadt directly, please visit his website at: www.cecilcountydecoys.com.

The earliest document of record referring to John B. Graham is the 1850 Census, in which his occupation is listed as a carpenter. It is interesting to note that by 1850, John B. Graham’s first wife had died, although his son. John Cooper Graham, who in 1850 was five (5) years of age was living with Mary Graham, the widow of John B. Graham’s brother William E.G. Graham.

At about 1853, just before the death of his father, John B. Graham began his undertakers’ business in Charlestown. The Methodists, until the dedication of the present church in town, had used a frame building at the corner of Caroline and Bladen Streets for their meeting. That building was sold to John B. Graham were he continued his undertakers’ business until about 1895. That building burned in 1932.

In the 1870 Census, John B. Graham is listed as a “cabinet maker.” His wife, Caroline and each of his three (3) children are with him at home, as is his brother, Alfred Zachariah Graham. Interestingly, a fourteen (14) year old Negro girl, Cornelia Johnson, who is listed as a “house keeper” is also living in the household. John C. Graham, who in 1870 was twenty-five (25) years old is listed as a carpenter, and is still living at home.

In the 1878 publication of The Maryland Directory, published by J. Frank Lewis & Co. of Baltimore, John B. Graham and his brother Francis D. L. Graham [My 2nd great-grandfather/Warren] are both listed as carpenters in Charlestown, and John B. Graham is also listed as an undertaker. The publication, in addition to listing the various patrons from Charlestown and their occupation, describes Charlestown as: “Is near a station on the P. W. & B. R. R. Of that name, 40 miles from Baltimore. It is beautifully [sic] located on the west bank of the North East River, and commands a picturesque view of the Chesapeake Bay for over 20 miles. It is regularly laid out into streets and squares, and is one of the most pleasant locations in the State for a town. You can in almost any part take in at a glance the North East, Elk , Sassafras and Susquehanna Rivers, with their hundreds of sails. It is healthy at all seasons; the farms are highly productive and worked by intelligent and enterprising men; fishing is carried on to a considerable extent from the waters in the vicinity which abound in fish of several varieties. The land is clay and sandy loam, principally cleared; can be bought at from $25 to $40 per acre, and yields 20 bus wheat, 50 oats, 100 potatoes, 40-50 corn, and 1 1/2 tons hey. M. E. Church, Rev. Samuel Logan. Public School, Geo. S. Mattingley and Miss Jennie Killough, teachers. Population 250. Wm. T. Richardson, Postmaster.”

Two (2) years later in the 1880 Census, John B. Graham is still making cabinets in Charlestown. The Graham’s house keeper, Cornelia Johnson, has had a child, Charles, who is two (2) years old; and George S. Mattingley, a twenty-seven (27) year-old school teacher is living with the rest of the family. Alfred Zachariah Graham, too, is living in his brother’s home.

On Thursday, the 20th inst., a bright and cheerful day, a pleasant party invited for the occasion were assembled to witness the marriage ceremony of Mr. George S. Mattingley, the gentlemanly Principal of the public school at Warwick, and Miss Helen Graham, the accomplished daughter of Mr. John B. Graham of Charlestown, in this county. The guests, friends and relatives of the family were from Wilmington, Del., Rising Sun and other places, and to the number of twenty couples were assembled in the parlor. At one o’clock the hour appointed for the ceremony, the bridal party, preceded by Miss Kate B. Richardson and W. H. Graham, the cousin and brother of the bride entered the room. The bride looking very sweet and handsome was tastefully dressed in silk, decorated with a few choice and beautiful natural flowers. The ceremony was performed by Rev. Mr. Hammersley, pastor of Charlestown Circuit assisted by Rev. J. D. Kemp, of Rising Sun. After the accustomed congratulations were over, all were seated at the splendid banquet, to which they did ample honor, and at its close the bride and groom took their departure for Baltimore, on their wedding tour, and the guests to their several homes. No more happy and joyous occasion has been witnessed in Charlestown for years.” END_OF_DOCUMENT_TOKEN_TO_BE_REPLACED

After posting three articles and scores of unknown photos of my Graham and Howell ancestors, I am happy to announce that one of the photos has been identified! Through ancestry.com I met my 3rd cousin, Suzanne Grimes, who has a number of 19th century Howell photos. Her grandmother, Beatrice Howell Johnson, had the foresight to write, “Grandmother Howell wife of Augustus Nolan Howell” on the back of this cabinet card.

May I present Susanna Reynolds Howell, my great-great grandmother: 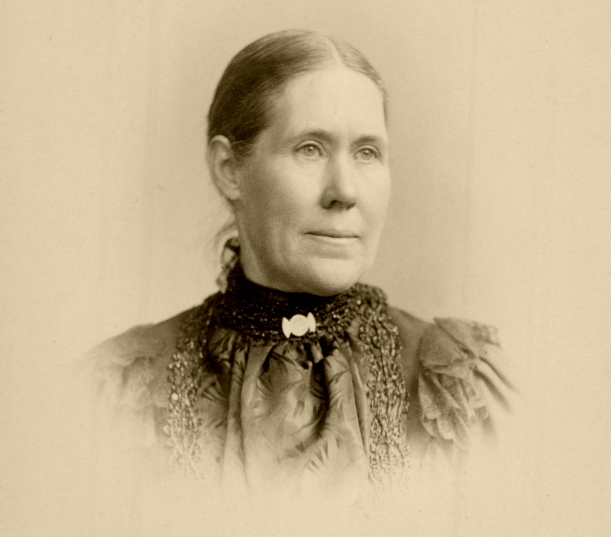 Susanna’s parents were John and Sarah Mary Reynolds. According to her death certificate, Susanna was born November 17, 1841, in Elkton, Maryland. However, the 1880 and 1890 census records show her birth year as 1844 and place of birth as Delaware. Could it be that she fudged the dates on the census in order to appear to be only 3 months older than her husband (rather than 3 years and 3 months older)? END_OF_DOCUMENT_TOKEN_TO_BE_REPLACED

Most of the images in my collection of unknown photos are cabinet cards. Although introduced in England in 1866, cabinet cards did not become popular in the United States until the late 1870’s. If my dating estimates are close, the cards in this collection date from the mid 1880’s and later.

Photo paper in the late century was thin and subject to curling, so the photographer would mount the picture on a stiff card measuring usually 4¼ by 6½ inches, considerably larger than tintypes andThe cabinet card’s name probably derived from the fact that these larger cards could be displayed on a cabinet and seen from across the room, unlike their smaller predecessors.

The card itself evolved over time from very plain to quite elegant and included different colors, edges, borders, and fancy artwork advertising the studio. These attributes are used to determine the approximate dates the photos were taken. I estimated the dates attached to the photos in this gallery using the card designs and the guidelines in 19th Century Card Photos Kwik Guide by Gary W. Clark. Hair styles and clothing fashion are also used to date photos, but I found this difficult and confusing. That method I will leave to the experts. The date of one photo however I am sure of because someone took the time to write it on the back. END_OF_DOCUMENT_TOKEN_TO_BE_REPLACED 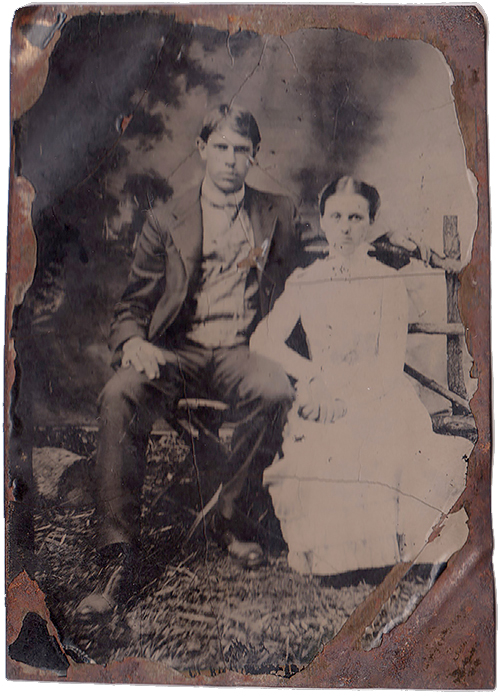 The tintype photograph, patented in the United States in 1856, was the first photographic process that nearly everyone could afford. It was hugely popular during the Civil War and photographers in their covered wagons would follow military units and provide these inexpensive pictures for the soldiers to send home to their families. Their loved ones also would reciprocate and sent their sons, husbands and fathers tintype photos from home.

While most popular from the late 1850’s thru the 1870’s, tintypes continued to be produced into the early 20th century.  The tintype photo is a direct positive on a thin sheet of iron (not tin!) coated with a dark lacquer. These were very resilient, did not need drying, and could be handed to the customer just a few minutes after the photo was taken.

Tintypes are difficult to date precisely. Clothing, hair style and props are one method to get an approximate time frame. There were 20 or so tintypes in the mysterious box of unknown photos of my Howell and Graham ancestors from Cecil County, Maryland. For more about these photos please see Unidentified Graham & Howell Photos #1. I think most of the photos in my collection are from the 1860’s and 1870’s. END_OF_DOCUMENT_TOKEN_TO_BE_REPLACED

Occasionally totally awesome and unexpected good fortune occurs while researching family history. This happened to me this past summer, but as you will see, this particular good fortune is both sweet and bitter. Earlier this year I met Mr. Charles Murphy on ancestry.com and we exchanged a few messages. Charles sent me a box of old photos of my Graham and Howell ancestors.  It was an amazing experience to open and look through the approximately 125 photographs including cartes de visite, tintypes and many cabinet cards, most dating to the late 1800’s.

That’s the very “sweet” part. The “bitter” part is that very very few are labeled! I have no idea who they are! Charles said that a number of them had originally been rubber banded together and labeled “Howell” but the rubber band disintegrated over the years and those cards are no longer distinguishable from the others. END_OF_DOCUMENT_TOKEN_TO_BE_REPLACED

My great-grandfather, Jonathan James Graham, was born in Charlestown, Cecil County, Maryland, October 22, 1865, the same year the Civil War ended. He was the 5th of 8 children of Francis Dailor Lafayette Graham and Elizabeth A. Rutter. The Grahams of Charlestown were cabinet makers, boat builders, carpenters, undertakers, and duck decoy makers. The 1880 US census lists Jonathan’s father Lafayette as a boat builder and the 1882 Charlestown directory lists him as a carpenter. END_OF_DOCUMENT_TOKEN_TO_BE_REPLACED

This is an article written by C. John Sullivan Jr. It was published in the July/August 1997 issue of Decoy Magazine (pages 8-13) and in Mr. Sullivan’s book Waterfowling on the Chesapeake 1819-1936 (pages 157-162) published in 2003 by the John Hopkins University Press. The Decoy Magazine article and the chapter in the book are essentially the same. The following is a transcription from the book with two added paragraphs from the magazine article that were not included in the book. My thanks to both Decoy Magazine and Mr Sullivan for permission to include their work on this website.